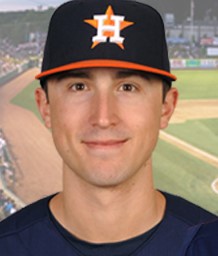 Prior to joining the Astros, Murphy served stints as the pitching coach at Brown University, and co-manager and pitching coach for the Northwoods Collegiate League Battle Creek Bombers.

In 2013, Murphy was a volunteer assistant coach at Georgetown University, and also coached in the Cal Ripken Collegiate League with the Rockville Express. Murphy was a full-time coach at Roselle Catholic High School from 2010-11 and 2012-13, which included stints as the varsity pitching coach. He has also coached at the American Legion level (2011-12), and in 2012 was an assistant coach for the Middlesex Rays of the Atlantic Baseball Confederation Collegiate League.

Murphy graduated from Rutgers University in 2010 with a bachelor’s degree in psychology and a minor in history. While at Rutgers, he was a pitcher on the baseball team for three years. Murphy received his MBA in management from Wagner College in Staten Island, N.Y., where he played first base during his final year of eligibility.