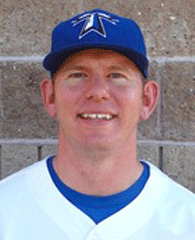 The most successful coach in the history of UMass Boston baseball head coach Brendan Eygabroat will enter his 16th season in 2019. The only coach in program history to ever lead the Beacons to the College World Series, Eygabroat's success has been recognized through the collegiate levels.

A true teacher of the game, Eygabroat’s coaching philosophy has helped numerous players earn multiple All-American, All-Region, and All-Conference accolades. He currently sits as just the second coach in UMass Boston history to record over 300-career wins, as he boasts an overall record of 355-282-1. He has led UMB to four consecutive NCAA Tournament appearances (2016-19) and five 30+ win seasons (2010, 16-19).

Over the last three seasons (2017-19), UMass Boston cemented its place as the top team in New England, and as one of the premiere programs in all of Division III.

UMass Boston put together their most successful postseason run in program history in 2019. Over the course of the month of May, UMass Boston won back-to-back postseason tournaments, before making their deepest ever run at the College World Series. After struggling out of the gate (8-6), UMass Boston went 18-5 to close out the regular season, including an 11-game winning streak.

The Beacons entered the LEC Tournament as the two seed and cruised to a 4-0 sweep, to become the first program in LEC history to win three-straight LEC Baseball Tournaments. The following weekend UMass Boston earned their rights to host their first-ever Regional and UMass Boston swept through their three games, outscoring their opponents 33-7. One week later, UMass Boston defeated New England College 2-1 in the three-game Super Regional which also was hosted at Monan Park. The Beacons carried that success into the College World Series, as UMass Boston opened the WS with back-to-back wins to double their wins from their previous two trips. UMass Boston eventually finished third, their best-ever finish at the College World Series. The Beacons finished the season 37-14 (14-3 in LEC play) and ended the year ranked #3/5 in the two national polls.

The first program in UMB history to be ranked number one in the country on multiple national polls, the Beacons cruised to their second straight LEC title in 2018. The Beacons were once again the top-seed in the NCAA Division III New England Regional tournament. In 2017, the Beacons hoisted the program’s second NCAA Regional crown and advanced to the College World Series where they earned the program’s first CWS win over fellow New England rival Wheaton College (MA). That year they also won their second Little East title, securing the program’s than second straight trip to the NCAA Tournament.

Between the past three seasons, the Beacons posted a combined record of 112-36, and were 35-9 in Little East play during those two seasons.

The 2016 season marked a magical year for Eygabroat and his Beacons. After traveling all over the state for practices and "home" games, the Beacons finally found a place to call their own. In late March the Beacons played the first-ever home baseball game on the UMass Boston campus at the brand-new state-of-the-art Monan Park. The Beacons would open the park and the season with a huge regional win over MIT. That victory would spark one of the most impressive seasons since their run to the College World Series in 2010. The Beacons would cruise through the Little East Conference on their way to their first regular season title.

During that stretch, UMB would win 13 consecutive games, and earned the right to host the conference tournament on their new home. After falling just short in the conference tournament, the Beacons saw their season continue when they earned the first-ever at-large bid to the NCAA Tournament in UMass Boston history. The Beacons traveled to Moosic, PA to take part in the NCAA Mid-Atlantic Regional Tournament. They would continue their winning ways as they knocked-off their first two opponents in Haverford College and Penn State Berks. They would eventually fall to regional champs St. John Fisher College and runner-up Kean University (NJ). In total seven players earned All-Conference honors, with Dan Mantoni and transfer Dave Murphy also earning D3Baseball.com, NEIBA, and ABCA All-Region honors.

In 2015, Eygabroat and his Beacons produced the second-most successful season in program history earning a combined 23 wins overall, while also establishing a new program record for conference wins with nine. A total of four Beacons would grab All-Conference honors, which included the program's first Rookie of the Year in Josh Lopez. In the month of April, Eygabroat guided his Beacons to wins over regionally ranked opponents Endicott College, Eastern Connecticut State University, and St. Joseph's College (Maine). He would also see his team defeat national champions SUNY Cortland during their annual spring trip in Florida. Eygabroat would also set a new career milestone, as he surpassed the 200-win mark following a conference split with longtime rival Eastern Connecticut State.

The 2014 season, Eygabroat saw four Beacons earn All-Little East Conference honors. Senior Jamill Moquete became just the second player in program history to be named the conference's Player of the Year. The Boston native would then make program history by becoming the first player under Eygabroat, and second in school history, to be drafted in the Major League Baseball (MLB) Amateur Draft. Moquete, was selected in the 32nd round by the Baltimore Orioles, after a standout three-year career with UMass.

In 2011 Eygabroat saw senior Ryan Walsh earn LEC and ECAC Player of the Year accolades. Walsh would go onto be named a First Team All-American as well as sign a professional contract.

During Eygabroat's 14 years his program has produced six All-Americans, the league's Pitcher and Rookie of the Year three times and Player of the Year two times, 28 All-New England Region honorees and 48 players have been named to the Little East Conference All-Star squad.

His players have also competed in prestigious summer leagues around New England such as the legendary Cape Cod League and New England Collegiate Baseball League. Since 2008, Eygabroat has had two of his former players sign professional contracts to play in the CanAm Independent League.

Before joining the college coaching ranks, Eygabroat enjoyed an outstanding college playing career at Mary Washington College in Virginia, where he helped the Eagles to a pair of NCAA Regional tournament appearances in 2001 and 1998. The Rochester, New York, native was named captain for the Mary Washington College for his senior season and earned South Region Honorable Mention honors as a catcher. Eygabroat also earned a spot on the Capital Athletic Conference First Team. Eygabroat was also part of the Eagles CAC championship as a freshman in 1998.

Eygabroat graduated from Mary Washington in 2001 with a bachelor’s of science in business administration. Eygabroat also earned a master’s degree in higher education administration from Suffolk in 2003.