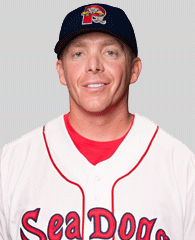 In 2019, Darren was named the Boston Red Sox's Minor League Outfield & Baserunning Coordinator, giving him the oppotunity to work with players throughout the Red Sox organization.

Darren Fenster was named the manager of the Portland Sea Dogs by the Boston Red Sox in January 2018. That season marked Darren Fenster's 7th year with the Red Sox, his 6th year as manager in the organization, and his first season as manager of Portland. He spent the previous four seasons leading the Greenville Drive, Boston’s class-A South Atlantic League affiliate. Fenster led the Greenville Drive (South Atlantic League) to their first championship in team history in 2017. The Drive went 79-60 and defeated Kannapolis 3 games to 1, capturing the South Atlantic League crown. Following the season, Fenster led the Peoria Javenlinas to the Arizona Fall League Championship. During his tenure he has managed many of the club’s top prospects, including current Major Leaguers Andrew Benintendi and Yoan Moncada. His managerial career began with the GCL Red Sox in 2013 where he led the team to a division title and appearance in the Gulf Coast League Championship Series, after serving as hitting coach for Greenville in his professional coaching debut in 2012 where future Major Leaguers Blake Swihart, Garin Cecchini, Henry Owens, and Matt Barnes would make their full-season professional debuts.

Previous to joining the Red Sox, Fenster spent six seasons on the Rutgers University baseball staff working under ABCA Hall of Famer Fred Hill as Director of Operations, Assistant Coach, and Recruiting Coordinator. In 2007, he helped lead the St. Cloud River Bats to the Northwoods League title as assistant coach, and served as third-base coach for the Cape Cod Baseball League’s Orleans Cardinals the following summer in 2008 where he helped guide the club to a league-best 25-17-2 regular-season record.

As a player, Fenster was selected the Kansas City Royals in the 12th round of the June 2000 draft and was named a Carolina League All-Star in 2002 and 2004 as a member of the Wilmington Blue Rocks. He spent five seasons in the Royals minor league system hitting .267 with 63 doubles, 179 RBI and 215 walks in 438 games before suffering a career-ending knee injury while with the Major League club in spring training in 2005. A two-time All-American shortstop and Big East Player of the Year at Rutgers University, Darren was elected into the Rutgers Olympic Sports Hall of Fame in 2008 and was also inducted into the Middletown High School South Athletic Hall of Fame in 2007.

In addition to his work with the Red Sox, he serves an advisor to USA Baseball as a member of their Sport Development Team where he offers insight to various initiatives geared towards growing the game from a grass-roots level, while authoring Fundamental Skills Friday, a weekly blog detailing assorted aspects of the game and coaching as a whole. Additionally, he is regular contributing writer to a number of nationally published magazines including Inside Pitch and Coach and Athletic Director. He also consults for various organizations, leagues, and teams across the globe through his own personal venture, Coaching Your Kids.