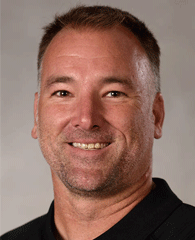 Now entering his 13th season as the head coach of the Holy Cross baseball team in 2019-20, Greg DiCenzo continues to help establish Holy Cross as a top-tier program in the Patriot League and the Northeast. The Crusaders have gone 285-323-1 overall and 137-109 in Patriot League regular season play during DiCenzo's tenure, with the team posting 20-win seasons in 10 of the last 12 years.

Holy Cross won its first Patriot League Championship in program history in 2017 under DiCenzo’s guidance, and the Crusaders have made four additional Patriot League championship series appearances in 2010, 2012, 2013 and 2016. Holy Cross has qualified for the Patriot League postseason every year since 2015 and in seven of the last eight years.

DiCenzo, who was named Patriot League Coach of the Year in 2008 and 2013, is the third-winningest coach in program history and ranks seventh all-time in victories by any Holy Cross head coach.

The Crusaders qualified for their fifth straight Patriot League postseason berth in 2019 after finishing in second place in the regular-season conference standings. With a 15-10 record in Patriot League play, the Crusaders saw their most Patriot League wins since 2013, matching the most in DiCenzo’s tenure. DiCenzo’s squad saw four All-Patriot League selections in first teamers Evan Blum, Declan Cronin and Liam Dvorak and second teamer Austin Masel.

DiCenzo and the Crusaders opened the 2018 season in an impressive fashion, defeating national No. 24 Houston, 3-2. The Crusaders went on earn a spot in the Patriot League tournament behind All-Patriot League selections Danny Barlok, Austin Masel and Chris Rinaldi.

In 2017, DiCenzo led the Crusaders to their first-ever Patriot League Championship, with the team going 4-0 in the conference tournament with series sweeps of Army West Point and Bucknell. Holy Cross then made its first appearance in the NCAA Tournament since 1978, competing in the Corvallis, Ore. Regional at Oregon State. The Crusaders earned their first NCAA Tournament victory since 1978 by defeating No. 25 Nebraska in their second game of the regional by a score of 7-4, eliminating the Huskers from the postseason. Four Crusaders were named to All-Patriot League teams in Austin Masel, Anthony Critelli, George Capen and Thomas Russo; Masel was named the Patriot League's Rookie of the Year and earned Freshman All-American honors from Collegiate Baseball. Critelli additionally earned the 2017 Senior CLASS Award.

In 2015, Holy Cross had six players named to All-League teams, including four first-team selections, as well as a second team All-New England honoree in Sean Gustin. DiCenzo also coached the Patriot League Rookie of the Year in Cam O'Neill, who set a program record for hits by a freshman (56). Academically, Holy Cross had a pair of student-athletes named to the Academic All-Patriot League team and one player (Jack St. Clair) who earned CoSIDA Academic All-District team laurels.

In 2012, DiCenzo earned New England Division I Coach of the Year honors after the Crusaders finished with an overall mark of 33-22 to break the school single-season record for victories. Holy Cross also placed second in the Patriot League with a 13-7 mark in conference games, and finished as the runner-up in the league tournament. Three players were selected to play in the New England All-Star game, seven Crusaders earned All-Patriot League honors and Nate Koneski was drafted in the 19th round by the Seattle Mariners. Holy Cross also upset No. 4 Texas A&M during its spring trip to start the season.

The 2011 season saw the Crusaders finish with a winning overall record for the first time since 1991 at 24-23-1. Two players earned first team All-Patriot League honors, and John Pedrotty was drafted in the 13th round and signed by the Arizona Diamondbacks.

In 2010, Holy Cross then won its first-ever Patriot League playoff series by taking two out of three games at Lehigh, and finished as the runner-up in the conference tournament. Stephen Wadsworth earned Patriot League Rookie of the Year honors and was selected as a third team Freshman All-American, while six Crusaders earned spots on the All-Patriot League teams. The 2010 squad also broke school single-season records in a number of offensive categories, with 367 runs, 569 hits, 45 home runs, 852 total bases and 340 runs batted in.

During DiCenzo’s second season at the helm in 2009, Holy Cross took third place in the Patriot League at 11-7 to qualify for the Patriot League Tournament, where they dropped a close three-game series to eventual conference champion Army. In addition, Matt Perry took home Patriot League Player of the Year honors.

DiCenzo came to Holy Cross from Northeastern University, where he served as the pitching coach and recruiting coordinator for five seasons. During his time at Northeastern, the Huskies won the America East Tournament and advanced to the NCAA Tournament in 2003, while winning the America East regular season title in 2004 and 2005. The Northeastern pitching staff set the school record for strikeouts in DiCenzo’s first four seasons as pitching coach. He had two pitchers earn America East Pitcher of the Year honors and four of his pitchers were drafted, including Adam Ottavino, who went in the first round to the St. Louis Cardinals in 2006 and made his Major League debut in 2010. Additionally, six positional players were drafted or signed to professional contracts during DiCenzo’s time at Northeastern.

DiCenzo was also an assistant coach for the Falmouth Commodores of the Cape Cod Baseball League from 2002-2005. While on the Cape, DiCenzo had the opportunity to work with many top players, including future major leaguers David Aardsma, Matt Antonelli, Cliff Pennington, Jacoby Ellsbury, Chris Leroux, Jensen Lewis, Chad Huffman and Brian Bocock.

A native of Duxbury, Mass., DiCenzo earned three degrees from St. Lawrence University with a Bachelor of Science Degree (1998), a Master’s Degree in Education (2000) and a Master’s Degree in Education Administration (2002). He spent four seasons on the baseball coaching staff at his alma mater – three as an assistant coach and one as an interim head coach – and two seasons as an assistant football coach. As an athlete, DiCenzo was a four-year member of the St. Lawrence baseball team, captaining the team as a senior. He was also a one-year member of St. Lawrence’s men’s soccer team, and a four-time All-Conference kicker and punter for the school’s football team.

DiCenzo and his wife Klio reside in Hopkinton, Mass. with their daughter Nikoletta.