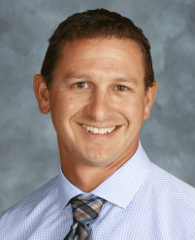 Luke has been a teacher in the South Burlington School District for the past 15 years. He teaches Health and high school Physical Education, coaches Varsity Baseball, coaches Middle School Boys A Team Soccer, founded and directs the Strength & Conditioning Club within the South Burlington School District (Fall 2004 - Present). Coach Goyette is entering his 15th season coaching in the baseball program, and his 10th season as the Varsity Head Coach with a record of 102-61 in 9 seasons. Prior to becoming the Varsity Coach, Luke spent 4 seasons as the Junior Varsity Coach, and 1 season as the Middle School Coach.

Coach Goyette was selected as the 2017-2018 ALL-USA Vermont Baseball Coach of the Year.

In the Fall, Coach Goyette has spent 15 seasons as the Boys Middle School Soccer Coach at Frederick H. Tuttle Middle School. His soccer athletes have gone on to capture 3 High School Division I State Championships.

In the Summer of 2005, Coach Goyette was an Assistant Coach under Jim Neidlinger (former LA Dodgers Pitcher 1990) for the SAL Legion Team based out of Hinesburg, VT. In addition, he also coached two seasons of AAU U16 travel ball in 2008 and 2009 with the Vermont Edge.

Goyette played college baseball at Castleton University (1998-2003) where he posted a career .390 batting average (batted.463 Jr year, ranked 14th in the Nation among DIII players) over 4 years for the Spartans. As a result, Coach Goyette was invited to participate for the Warriors (based out of California) to travel to Europe and play in Holland and Belgium. During his playing days at Castleton, he was selected as a tri-captain and was part of a solid group of players that helped to turn the program around. In the Spring of 1998 (the year prior to Goyette’s attendance) the Castleton Baseball team posted a record of 2-24. At the culmination of Goyette’s playing career, the team improved to a 24-16 record. In his 5th year at Castleton, Luke completed his Bachelor of Science with a dual major in Physical Education Teacher Prep and Sociology/Health. He continued with the Castleton baseball team as an Assistant Coach to current Head Coach Ted Shipley.

Luke is native of Sutton, Quebec, CA, is fluent in French, and resides in Essex Junction, VT with his wife Kristi and son Sulley (2 1/2).