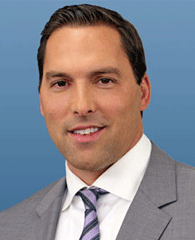 Mark DeRosa, a 16-year Major League veteran, is an analyst appearing across MLB Network's programming, including as a co-host on the regular season weekday morning show MLB Central alongside Robert Flores and Lauren Shehadi. DeRosa initially served as a guest analyst on MLB Network during the 2011 and 2013 Postseasons, and joined MLB Network in November of 2013.

DeRosa received the John Cerutti Award after the 2013 season, presented annually by the Toronto chapter of the Baseball Writers' Association of America to the player who best represents the spirit of the late Blue Jays pitcher. DeRosa attended the University of Pennsylvania where he was the starting shortstop for the baseball team and the starting quarterback for the football team.