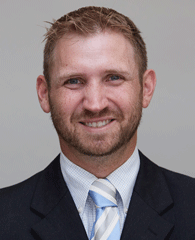 Leonard took over the reins of the Middlebury baseball program in June of 2016. Leonard came to Middlebury from Bates, where he earned a record of 114-111 over his six years, including three 20-win seasons and a 23-17 mark in 2012.

In his first season guiding the Panthers in 2017, Leonard guided the team to the second-most victories in the program's history (22-16). He led Middlebury to its second NESCAC Tournament title game and the first since 2006. At the conclusion of the season, three Panthers were named to the All-NESCAC teams.

A former Boston Red Sox minor leaguer and All-Big East catcher at the University of Connecticut, Leonard spent six seasons at Bates before coming to Vermont. He led the Bobcats to the NESCAC Baseball Championship tournament in back-to-back seasons, including rallying with a three-game sweep of Trinity in the final series of the 2015 season to earn a trip to the playoffs. Bates posted an overall record of 17-20, and finished second in the NESCAC East with a 7-5 record. In the spring of 2016, Leonard’s team concluded with a 14-21 mark and 4-8 in the conference.

A four-year starting catcher for Division I Connecticut, Leonard was an All-Big East selection in 2002 and 2003, and he remains on the Huskies’ top-15 career lists in hits (205), runs batted in (118), at bats (648) and games played (177). He was a team captain, a Dee Rowe Athletic Scholarship winner and a Big East Academic All-Conference honoree. During his college years, Leonard also played with the Harwich Mariners in the Cape Cod Baseball League. Leonard starred at Rockville (Conn.) High School, and was named both the Connecticut Gatorade Player of the Year and Hartford Courant Player of the Year. In 2013, Leonard was inducted into the Rockville (Conn.) High School Athletic Hall of Fame.

Leonard signed as a free agent with the Red Sox at the conclusion of his playing days at UConn, where he earned his bachelor’s degree in political science in 2004. He spent four years as a catcher in Boston’s minor-league system, reaching the Double A level with the Portland Sea Dogs. He concluded his professional career in 2009 as a player-coach under former Red Sox catcher Rich Gedman with the Worcester Tornadoes of the independent Can-Am League.

During his stint with the Red Sox, he played for the Gulf Coast League Red Sox, the Lowell Spinners and the Greenville Drive before reaching Portland. While playing with the Spinners in 2005, Leonard competed alongside future major leaguers such as Jed Lowrie, Clay Buchholz and Jacoby Ellsbury.

Leonard began his collegiate coaching career as an assistant coach at St. Lawrence University in 2008 and 2009, with primary responsibilities for pitchers, catchers, hitters and strength and conditioning. At St. Lawrence, he obtained a master of education degree in 2009. A year later, Leonard was appointed the head coach at Elms College in Massachusetts. He instituted the “Blazer Buddies” after-school mentor program while at Elms that served 15 elementary school children in the area.