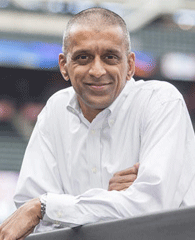 Sweeny Murti is a sports journalist who primarily covers the New York Yankees. He currently works for WFAN, SportsNet New York, and the New York Yankees Radio Network. He is the Yankees beat reporter for both WFAN and SNY and hosts the pregame and postgame shows for Yankees radio broadcasts.

Murti attended Pennsylvania State University from 1988–92, graduating with a degree in Communications. While there he worked for radio stations WRSC/WQWK mainly as an on-air sports and news anchor, also as a producer for Penn State football post game shows and as an occasional FM DJ.

From 1992–93, Murti worked for WHP-Harrisburg, Radio Pennsylvania Network, and WGET-Gettysburg.

Since 2001, Murti has covered the New York Yankees for WFAN and is also a regular contributor to SNY and MLB Network. He has also been seen frequently on WNBC-4 New York, WCBS-2 New York, and YES Network.