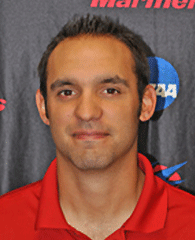 Travis Beausoleil is entering his seventh season as head baseball coach at Mitchell College in 2017-18. During his tenure he has posted 146 victories, won three New England Collegiate Conference Championships and thrice brought the Mariners to the NCAA Championship.

Beausoleil has turned Mitchell into one of the top teams in New England. Last season the Mariners posted 29 wins and produced the first ABCA/Rawlings All-American in school history. It also marked the program's fifth straight NECC regular season title, as well as the fifth straight appearance in the NECC Championship title round.

The 2016 season (28-11 overall) culminated in a third straight NECC Championship for Beausoleil and the program. The Mariners made their fourth NCAA appearance and won a regional game for the second time in three years, defeating host Eastern Connecticut State University by a 3-2 final. A total of seven players earned conference recognition while two received regional recognition.

Beausoleil took the Mariners to new heights in 2015 as the team ranked fourth in the country in winning percentage (.821) and set the program record for wins (32). Mitchell went 16-2 in NECC play and captured its second straight NECC Championship, earning the right to represent the conference in the NCAA Championship. Beausoleil was named NECC Coach of the Year and placed a record six players on the all-conference first team.

In 2014 Beausoleil led the Mariners to a breakout season that included a then school record 24 wins, a NECC Championship and the program's first-ever victory in the NCAA Championship. Mitchell tied for first place in the NECC regular season with a 12-6 record and powered past Becker College in the tournament to claim the league title. In the NCAA Championship, eighth-seeded Mitchell produced the upset of the New England Regionals with a 4-3 win over top-seeded Eastern Connecticut State University in 11 innings. The win was also the school's first in any NCAA postseason setting.

In 2013, Mitchell enjoyed a winning season that included a 15-3 record in NECC play. Mitchell tied for first place in the regular season standings and advanced to the title round of the NECC Championship, falling one win shy of earning a NCAA berth. Beausoleil's squad also received a berth into the ECAC Division III New England Championship for the first time in program history.

Beausoleil has proven to be a strong recruiter, more than doubling the roster size since taking over the program. With quantity has also come quality, as a total of 32 players have earned all-conference recognition under his tutelage. The Mariners most recently produced the 2017 NECC Player of the Year, as well as the NECC Pitcher of the Year in 2013, 2014 and 2015 and the NECC Rookie of the Year in 2013.

In addition to recruiting, Beausoleil has used the offseason to expand his coaching horizons. In 2016 he returned for his second season on the coaching staff of the Chatham Anglers in the prestigious Cape Cod Baseball League, serving as an assistant under John Schiffner. In the summer of 2012, Beausoleil served as an assistant coach with the DC Grays of the Cal Ripken Collegiate Baseball League. He was the lead assistant for head coach Arlan Freeman (Lynn University) and worked primarily with the hitters and infielders while serving as third base coach.

Beausoleil's baseball knowledge has been gleaned from some of the top coaches in the state. He served as a member of the support staff for the University of Connecticut baseball team, a nationally-ranked program that advanced to the NCAA Super Regional in 2011. At UConn he worked alongside head coach Jim Penders and (current University of Hartford head coach) Justin Blood. He also played for Roger Bidwell at UConn Avery Point and for John Schiffner at Plainfield High School.

"Travis is very well prepared to be a head coach, and Mitchell College is going to be rewarded multiple times over for making this hire," said Penders in August 2011. "He's a fantastic young coach who is extremely bright and has unbelievable energy. He knows how to communicate with the players. He has such a passion for the game and a desire to coach and educate young people."

Beausoleil began his collegiate playing career at UConn Avery Point where he was a two-time All-New England shortstop. He was the New England Region 21 Conference Player of the Year in 2007 and also garnered All-America second team honors. He helped the Pointers to two conference championships before completing his career at NC Wesleyan College, where he was a two-year starter at second base and a captain in final season.

A graduate of Plainfield High School, Beausoleil was a four-time ECC All-Conference infielder and an all-state selection as a senior. His playing resume also includes a stint with the Chatham A's of the Cape Cod Baseball League.